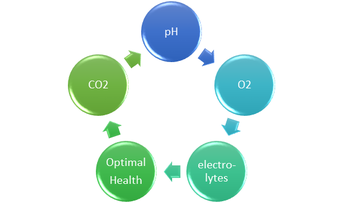 Respiratory chemistry refers to the balance of oxygen AND carbon dioxide.  Far from just a "waste gas," carbon dioxide is important in maintaining pH, electrolyte balance and oxygen distribution.  In fact, one could argue that carbon dioxide levels is what drives breathing.  In order to maintain optimum physiological processes, the level of carbon dioxide in our blood must remain stable (at about 35 mmHg).  Both breathing and metabolism play a role in maintaining those levels.  For instance, when we exercise and metabolism increases, there is more carbon dioxide production.  As a result, we breathe more, to "blow off" the excess carbon dioxide production and maintain homeostasis.  Sometimes, however we can get stuck in this overbreathing pattern (see Common Triggers for more information).  At that point, the body is producing less carbon dioxide than we are breathing off.  This lower carbon dioxide level triggers a few things itself.  First, pH levels are altered and we become more alkaline.  If this continues for longer than a few hours, the kidneys respond to try to balance pH, and they start excreting bicarbonate buffers - this what the body uses to neutralize acids, like lactic acid created during exercise.  This compensation ultimately disrupts electrolyte balance and can contribute to muscle fatigue, cramps and spasm.  Second, low carbon dioxide levels trigger vasoconstriction - that is, contraction of smooth muscle.  Smooth muscle is found in the airways, the gut and blood vessels.  And lastly, low carbon dioxide levels impact oxygen distribution.  Red blood cells that carry oxygen molecules are less likely to let go of the oxygen they are carrying when carbon dioxide levels are low (called the Bohr Effect).  The end result is that less oxygen goes to the target tissues (muscles, brain, gut) leading to symptoms of pain, poor cognitive functions, digestive upset and ultimately anxiety.  So it turns out, carbon dioxide is the key to maintaining optimum physiological processes and therefore optimum health.